Ever since her pet sheep Lulu accompanied her to school at the age of seven, animals and nature have been at the heart of Polly Pullar’s world. But an otherwise idyllic childhood spent in the spectacular Scottish West Highlands was marred by family secrets which ultimately turned to tragedy. Following the suicide of her alcoholic father, and the deterioration of her relationship with her mother, Polly rebuilt her life, earning a reputation as a wildlife expert and rehabilitator, journalist and photographer. This is her inspirational story. Written with compassion, humour and optimism, she reflects on how her love of the natural world helped her find the strength to understand her parents, and to find an equilibrium.

A remarkable, candid and fearlessly honest memoir, from the hugely talented Polly Pullar, peppered throughout with captivating details of nature in the wilds of Scotland.

In ‘The Horizontal Oak’ Polly Pullar skilfully and generously invites us into a life defined by a passion for wildlife and wild places, a life shaped by the addictions and loss of loved ones, a life full of compassion for the complexities of what it means to be human. The characters in this book are magnificent in all their flawed and colourful humanity. This deeply personal memoir is a treasure of insight, empathy and vulnerability, and the glorious people, animals and places within its pages will stay with you for a long time.

Nature in all its guises and a delightfully dark sense of humour are the forces that unite to overwhelm the consequences of a chaotic parental regime in this extraordinary and occasionally eye-moistening autobiography. Naturalist, writer, photographer and wildlife healer Polly Pullar emerges as a force of nature herself, still nursing some of life’s wounds, still smiling at the benevolent moments, still laughing out loud at its jokes. Like the eight-year-old girl watching her aviary who told her, “You are so lucky to have owls in your ovaries”, thereby summing up the life and the remarkable woman herself.

A bright and illuminating memoir of both human and wildlife from one of this country’s finest nature writers. A work that often startles with its honesty and truth. 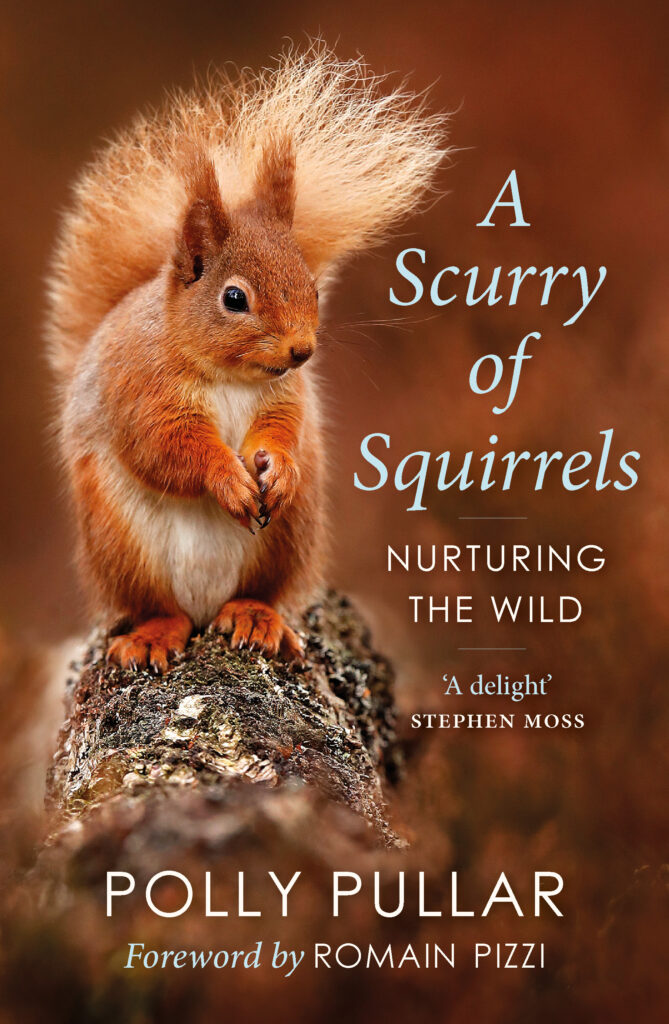 A Scurry of Squirrels – Nurturing the Wild

Scotland’s much-loved wildlife writer knows the red squirrel on a uniquely personal level having hand-reared numerous kits. Here she reveals the squirrel’s history and natural history and shares entertaining anecdotes and personal experiences. This is also the story of her dedicated rehabilitation work not only with squirrels but also a wealth of other wildlife and documents an inspirational rewilding project on her small Perthshire farm. Polly also explores many of the wildlife conflicts that face us, and highlights vital ways in which we can nurture the wild as never before in this thought-provoking and delightful book.

The Red Squirrel: A future in the forest

The Red Squirrel: A future in the forest showcases one of Britain’s favourite mammals and at the same time, makes the case for the expansion of its native woodland home. The book’s stunning imagery comes from renowned Cairngorms photographer Neil McIntyre, who has spent 20 years following the lives of his local squirrels. Neil’s images are perfectly complemented by the insightful and evocative words of celebrated nature writer Polly Pullar.

A Richness of Martens

Long-Listed for the Highland Book Prize 2019

When Les and Chris Humphreys moved to Ardnamurchan 15 years ago, little did they realise they would be sharing their home with some of Britain’s most elusive and misunderstood mustelids. Amongst all the animals and birds that visit their garden, they have formed a special bond with numerous pine martens, and have studied them and a cast of other creatures at close range through direct observation and via sensoroperated cameras.

Naturalist and photographer Polly Pullar has known the Humphreys and their pine martens for many years. In this book she tells the remarkable story of the couple and their animal friends, interpolating it with natural history, anecdote and her own experiences of the wildlife of the area. The result is a fascinating glimpse into the life of a much misunderstood animal and a passionate portrait of one of Scotland’s richest habitats – the oakwoods of Scotland’s Atlantic seaboard.

A Drop in the Ocean

Lawrence MacEwen and the Isle of Muck

Polly Pullar tells the fascinating tale of one of the Hebrides, unique thriving small communities through the colourful anecdotes of Lawrence MacEwen, whose family have owned the island since 1896. A wonderfully benevolent, and eccentric character, his passion and love for the island and its continuing success, has always been of the utmost importance. He has kept diaries all his life and delves deep into them, unveiling a uniquely human story, punctuated with liberal amounts of humour, as well as heart-rending tragedy, always dominated by the vagaries of the sea.

Filled with fascinating and extraordinary tales and priceless observations, this is not only a highly entertaining read but is also an important part of Scottish social history. The story begins with the amusing debut of Lawrence as a new baby when his mother returned from the hospital on the mainland, and carries on through his colourful island childhood and up to present day. Here are tales of coal puffers and livestock transportation on steamers and small boats, extraordinary chance meetings and adventures that eventually led him to finding his wife, Jenny, on the island of Soay.

It’s a book about the small hard-grafting community of 30 souls on this fertile island of just 1500 acres. Residents work closely with the MacEwen family in business interests: the thriving farm, market garden, a modern school, a busy tearoom, craft shop, and a winter shoot. A new village hall was opened in 2012, and a guesthouse in May 2013. Until March 2013, Muck depended on an unreliable generator for electricity that only came on twice daily, but now has finally been electrified with solar panels and wind turbines. It was one of the last places in the UK to receive 24-hour power.

ANIMALS AND PEOPLE IN SCOTLAND

Scotland is home to a huge and diverse range of wildlife. This informative and beautifully illustrated book is the most complete companion to Scottish animals and birds available.

Themed around various habitats (mountain; bog and moor; woods; lochs and rivers; croft and farm; sea and seashore; and about town), and including material on mythical beasts, it features a wealth of information on hundreds of species, and also includes our wonderful native farm livestock.

Packed with descriptions and natural history information, the text is interspersed with much detail – historical, folklore, anecdotal and even culinary – which offers fascinating insights into the role of animals and birds in our cultural life and the way man has interacted with them over a period of thousands of years.

Aimed at a wide audience and highly readable – Fauna Scotica is a valuable addition to every country enthusiast’s library.

A magnificent journey round Scotland encompassing every breed of Scottish native farm animal, and many of the colourful characters who keep them. Each chapter evolves through the meetings with the people both young and old. It is largely their anecdotes and nostalgia which shapes this fascinating book.

Here for example are tales from the infamous Lairg Sheep Sales, the Perth Bull Sales and the Royal Highland Show. Time is spent with the sea-weed eating sheep of North Ronaldsay, Blackface sheep, Belted Galloway cattle, Highland cattle, Clydesdales and Shetland ponies. There are amusing childhood reminiscences from remote Ardnamurchan, an account of an Ayrshire milking parlour at daybreak, a visit to the atmospheric bothy workshop of an elderly stick-maker, or the story of our newest breed of cattle, the Luing. From up and coming young farmers using embryo-transplant techniques for prime Aberdeen-Angus beef production in Orkney, to crofters in far-flung locations, Rural Portraits is richly varied.

Polly Pullar’s writing is clear, informative and full of anecdotal humour and deep feeling for the countryside. Her vivid images of landscape and the sights and sounds of nature are stunning, perfectly complimented by the 116 detailed images of internationally renowned artist Keith Brockie. This comprehensive and thoroughly readable record of a vital part of Scotland’s heritage is destined to become the definitive work on the subject. This is a book that appeals to a wide audience of varying age groups.

A Winged Collective of Birds from around the World

Ever wondered about what to call a group of ducks or swifts? A Winged Collective is an A-Z of the collective nouns of birds of the world.

Written by Polly Pullar, each bird section gives the reader some understanding about the bird and why they have the collective noun they have. The humorous illustrations by Clare Mackie make the book fun as well as informative.

You will soon be able to say there goes a Scream of Swifts over the heads of that Raft of Ducks!

Out of print
Clare Mackie (illustrator)

Further Afield With a Camera

A beautiful, unusual collection of photographs depicting Polly Pullar’s fascination with the countryside in all its aspects. The diverse chapters illustrate her deep passion and ‘seeing eye’ for subjects ranging from the monumental sea stacs of remote St. Kilda, to the tiniest details of back-lit floral studies. The relationship between the photographer and her subjects will delight.

The study of a pair of ospreys over several summers. Beautiful black and white illustrations.